It’s quite easy to forget about January and the fact that it’s just around the corner. With December so often the peak of the year for operators, January is more often than not subdued for venues as many customers take a step back from their favorite outlets having made the most of the festive season.

But making a success of this January is more important than ever for outlets and with healthier living at the forefront of consumers’ minds at this time as health kicks and New Year’s resolutions are in full swing, there’s no better time for pubs and bars to cater to them.

One of the biggest, and most lucrative, health-related trends in hospitality right now has been the meteoric shift towards veganism, and with Veganuary on the horizon, now is the perfect time to think about what you’ll offer the growing number of customers looking to eat a completely plant-based diet or reduce their meat intake.

Boosted by health, ethical and environmental credentials, the diet has skyrocketed in recent years, particularly in the UK, and the statistics lay that bare. According to data from Google Trends, Veganuary is set to overtake Dry January as the nation’s main health-focused initiative in the first month of the year.

And as more and more medical studies have linked a vegan diet to a reduced risk of cancer, heart disease and type 2 diabetes, it’s unsurprising to find there’s exponential growth in veganism. With that in mind, we’ve spoken to three operators behind successful vegan venues to get their advice on how to make a success out of Veganuary as it shapes up to be the largest one on record.

One in three UK consumers have reduced their meat intake either partly or entirely and vegans and vegetarians are predicted to make up a quarter of the British population by 2025.

What operators think about vegan options?

“If you haven’t got a few vegan options on your menu by now you really should,” he said. “Veganism is such a big movement now and there’s so many people either eating plant-based diets or cutting down on meat that it doesn’t make sense not to offer them something."

“With the amount of new options available to operators [almost one in four food and drink products launched in the UK last year carried a vegan claim], it’s become so much easier to put together good vegan dishes and present them in a way that customers will like.”

Not too long ago the diet was widely perceived as consisting solely of salads, quinoa and falafel but with vegan alternatives possible now for seemingly every dish, it’s possible to switch out meat in any dish successfully for a great tasting substitute, stated Rikki Baker, general manager at Liverpool’s Down the Hatch, which specialises in vegan pub food.

“Almost everyone knows now that veganism doesn’t just mean salads three times a day,” she said. “People know they can have good vegan burgers, curries and spaghetti bolognese for example, so I think this Veganuary will be the biggest one yet.I think the best thing to do in pubs and bars is to stick to what you do best with food but use meat alternatives. Find good quality substitutes that non-vegans or people interested in veganism can be sold on and really enjoy. 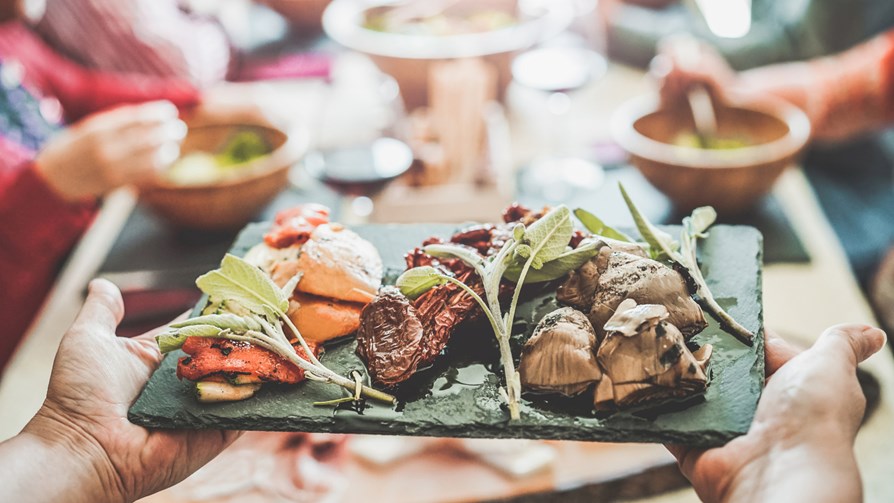 "Almost every classic pub dish can be made vegan now, whether it’s sausages and mash, burgers, pies, the possibilities are all there.I think a lot of operators looked into trying to introduce vegan options three or four years ago and the price of ingredients or the limited options available to them at the time may have put them off. Now, the market has changed in a big way, there is so much to choose from and something for every budget. Burgers are always popular so I think offering a couple of really good vegan burgers and hot dogs are solid options."

That tactic has worked well for the family-owned business, which offers eleven vegan burgers with patties made from seitan, soy mince and BBQ-pulled jackfruit. The dishes include ingredients as wide-ranging as peppered vegan cheese, chilli jam, hash browns and charred pineapple. Hot dogs, stir-fry and salads also all perform well for the outlet.

Meat alternatives are driving sales at Birmingham’s Warehouse Café too, where healthier plant-based versions of curries, fish and chips and kebabs are in demand. Putting the rise in veganism down to increasingly ethical and health-conscious consumers, chef Ciara believes the only way is up for meat-free.

“We have a seitan kebab, which we make with lots of spices and pair with a great sauce and a mix of vegetables. People are going mad for it as it’s just so tasty. I think in keeping with the weather and the season, options like nice bowls of stew with meat substitutes and warming curries are what is called for. The great thing for people looking to add vegan dishes to their menus is that meat substitutes are now of such a high quality.”

3 steps for a successful 'Veganuary'

One of the key drivers towards veganism has been the health benefits inherent in balanced plant-based diets.  Popular amongst an increasing number of elite athletes, not least Barcelona talisman Lionel Messi, and gym goers alike, veganism is gradually dispelling the common myth that the diet is devoid of protein.

Dishes such as curries can be made with seitan, tofu, lentils, peas, kidney beans and wild rice, all of which are packed with protein and can appeal to those beginning new fitness regimes in January.

If your vegan dishes contain nutrients that customers may be looking for more of in their diets, look to market this on your menu. “Protein-rich” and “high in fibre” descriptions on menus can help you capitalise on the trend toward healthier living. In addition, if a certain dish is particularly high in fruit or vegetables, it should also be highlighted with “two of your five a day” definitely enough to encourage some customers to select that option.

As Veganuary draws nearer and customers begin to look out for the best places to eat vegan options over the month, social media will be a vital means to draw in diners. So it’s crucial to think about how you’ll market these choices and more specifically what they will look like on camera and in newsfeeds.

Consider how you can make your dishes more instagrammable with the addition of interesting and eye-catching ingredients. Plenty of colourful vegetables served on similarly vibrant tableware can help convey quality and generate interest in an outlet’s offer.

Naturally, more camera-friendly and aesthetically-appealing options will have a far better chance of being posted on your guests’ socials ramping up the attention your food will receive online and generating further business.

Stay focused when it comes to drinks

The perfect way to package a stellar Veganuary offer is to pair meat-free dishes with vegan drinks, the good news is that the vast majority of drinks on offer from spirits to soft drinks in the on-trade are vegan-friendly.

However, there are certain areas of specific drinks categories which are hard to negotiate when it comes to animal products. Some beers and wines, which are seemingly vegan, can be made in a way which does use animal products. Double check any drinks you are promoting either on your menu or on signage online during Veganuary to make sure they are appropriate.

Remember hot drinks too, speciality coffee sales are showing strong growth for bars so it’s important to cater for vegans here too. While soya milk has been prevalent in high street coffee shops for years, the market is changing fast here too. Oat, almond and coconut milk are all popular alternatives to cow’s milk in gourmet coffee and tea and having one or two of them available to customers can help reinforce a truly comprehensive offer in Veganuary and beyond.

Ask us a question

Need to know something specific? We're here to help.

Become a Sensational Drinks member and keep up to date.